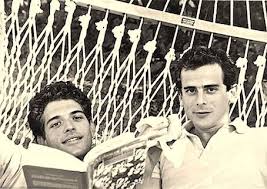 Often, when creating a non-fiction film of this nature, if the person making the documentary makes substantial appearances on camera it usually results in the storyteller straying away from the topic. What is so refreshing about this 2016 documentary is how Aaron Brookner discreetly remains respectful of his uncle. Beautiful footage of Aaron as a kid narrates how he became inspired by his favorite, fun uncle, but Aaron’s narration throughout the documentary maintains a reserve that seems almost dispassionate. Aaron lets the rich emotional link come to light in a natural way. The subject of Howard’s homosexuality remain inscrutable to some extent through video clips from Howard’s last years after he contracted AIDS, add insight and intimacy, especially in the manner in which his warmth and natural levity are undiminished. The image of Howard Brookner that comes together is of a person who as he wrote in an emotional letter to be read by his parents after his passing–lived his life without regrets and just as he wanted to. It appears Howard accepted his sickness with significant calm and was only sorrowful about those that would mourn him.

Aaron Brookner is disarmingly generous in his approach to the documentary and maintains substantial privacy regarding his own sentiments while seemingly deriving comfort in bringing back to life fond memories of those that loved Howard, including his lover Gooch. The documentary’s ending rips out your heart. After enjoying a New York sunset, uncle Howard wearing a goofy smile and a hoodie twirls around dancing to Hymn to her as Manhattan’s fading ghost watches him from grubby loft windows. Chrissie Hynde’s lyrics, “something is lost, but something is found”, neatly summarizes this soulful and rewarding documentary.

In a nutshell, Uncle Howard is the story of Howard Brookner–the man, as well as the artist–as experienced by Howard, his nephew, and those around him. In the documentary, is the careful narration of Howard Brookner’s life with a focus on his final years. Throughout the eighties, Howard Brookner was a significant player in the downtown New York scene. He was a gay individual from the affluent parts of New York City, attended NYU, writing his thesis on William Burroughs before tracking Burroughs down in his urban apartment. After tracking Burroughs down, he convinced him to participate in a film that would instantly become popular. Howard subsequently gained access to the famous Robert Wilson and went on to shoot another successful documentary on that very distinctive enigma. Howard Brookner passed away shortly after finishing the film Bloodhounds of Broadway in 1989. After watching the 2016 documentary, one can’t help but wonder if Howard Brookner would have had a successful career like Jim Jarmusch, had he not died. Even more successful perhaps? The documentary film, Uncle Howard is a modest film about Howard Brookner, about New York’s lost generation of gay people, and a certain time in New York City itself.